I started working the Vayo Meditation Garden early on. My first couple of years, the hort team, a single-digit numbered crew, worked together throughout the Gardens. We would split up into pairs and sometimes work a project alone, but bigger projects were always a team effort.

I worked the meditation garden with an interesting fellow who went by the nickname “Ollie.” We would rake, weed, and primp as Ollie told tales of his adventures. He had traveled extensively, sometimes even hopping a train to the next stop. I marveled at his stories, his zest for life.

Ollie also had a way of relating to people. Being a bit “frayed around the edges” didn’t seem to bother the guests, and they chattered away. Within moments, he would know where people were from, how long they were staying, and where they were heading next. So many times, they would burst with excitement, realizing that they had some mutual acquaintance somewhere. 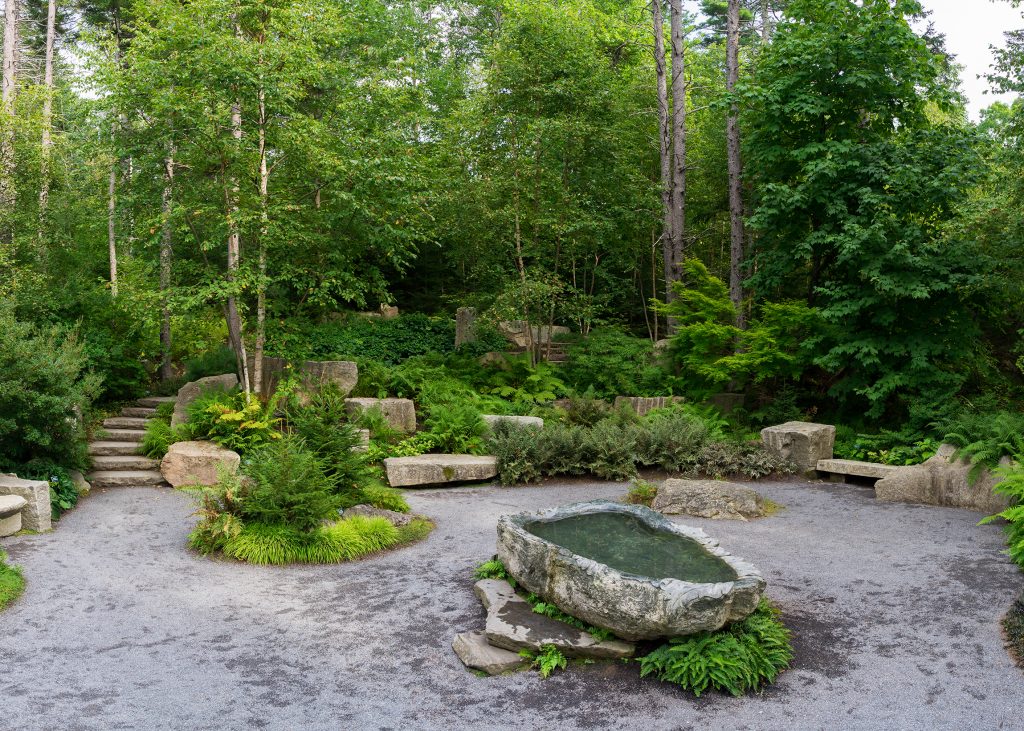 I recall the times that, after I talked to a guest, Ollie would ask me where they were from or some other, similar, question. More often than not, I didn’t know—if the information wasn’t volunteered, I didn’t ask. I didn’t have that talent. I did have the talent that allowed people their space and silence, to soak in the beauty around them. I knew that if I were visiting the Gardens and found myself here along the shore, nestled in stones, I would not need conversation.

After Ollie left, the Vayo Meditation Garden became just mine. It was the morning chore of cleaning the reflecting pool that I enjoyed most—the early morning moments when the birds were just waking and a sudden splash from the river were the only sounds I heard.

The clean water, as still as glass, reflecting the surrounding treetops and sky. A soothing rake of stone dust, a pull of fresh weeds, a deep breath of salty air, and I would stand back and soak it in. I would think of the visitors who would come through that morning, the first people to walk on the freshly raked paths. I liked that thought. I wondered if they realized what a special place this was, if it were their first time, or were they returning for another visit. I wondered, but I wouldn’t ask.