Guardians of the Seeds Essential Reads

Take the trolls home with you this winter by learning more about the real-life botany and ecology behind their fairy tale! Here is the trolls’ essential reading list—20 books about trees, the forest, the people who care for this important ecosystem, and our changing relationship with nature here in Maine and around the world.

The Overstory by Richard Powers 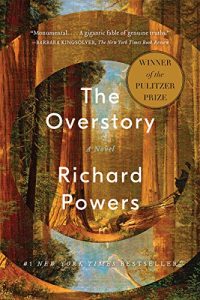 Winner of the 2019 Pulitzer Prize in Fiction, Overstory is a sweeping, impassioned work of activism as well as a radical rallying cry for the natural world. Beginning at the roots, this novel unspools in interlocking tales of nature and family, ranging from pre-Civil War New York to the late twentieth-century “timber Wars” of the Pacific Northwest. It is the story of a handful of people who learn how to see that world, drawn inexorably into its unfolding catastrophe. (Buy it from Gardenshop!) 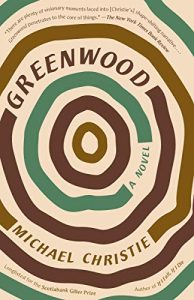 Greenwood begins in the year 2038, following scientist Jake Greenwood who is working as an overqualified tour guide in one of the world’s last remaining forests following an apocalyptic ecological disaster known as “The Great Withering”. A twist on your typical multigenerational family saga, this novel moves backward and then forward through the generations preceding Jake, following a unique timeline structured like nested growth rings. 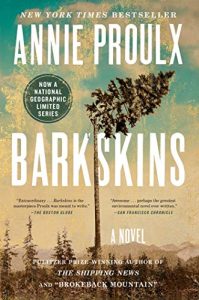 You may know this author from The Shipping News or Brokeback Mountain, and Barkskins is no less hauntingly compelling. Dubbed by the San Francisco Chronicle as “perhaps the greatest environmental novel ever written,” it’s a fast-paced, can’t-put-it-down ride through three hundred years of US and Canadian history, beginning with two young immigrants who become wood-cutters (or “barkskins”). The story of their descendants across time and land follows, victims to dire ecological circumstances long ago created. 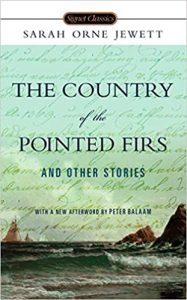 The Country of the Pointed Firs by Sarah Orne Jewett

This collection of novel and stories trace the lonely inhabitants of a once-prosperous seacoast town in Maine, focusing on its strong and resourceful women. It is a story of how environment shapes us and how the quiet simplicity of each day can be a source for inspiration. 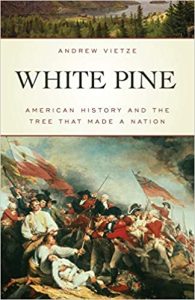 White Pine: American History and the Tree that Made a Nation by Andrew Vietze

This book about our beloved state tree is more than a collection of facts. It is a beautifully written tale that makes this majestic tree a central character in our American history. The book has dramatic features such as monarchy finance, power struggles, diseases and massacres all with the white pine tree at the center. 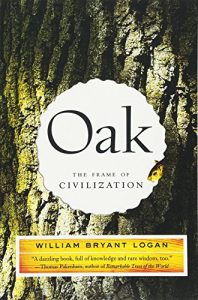 Oak: The Frame of Civilization by William Bryant Logan

There is a unique—and long-lived—reciprocal relationship between oak trees and humans, a delightful history that award-winning nature writer and professional arborist, William Bryant Logan, entrancingly relates in this book. With equal parts humor, respect, and compassion, Logan will inspire a newfound wonder for the oak in any reader. 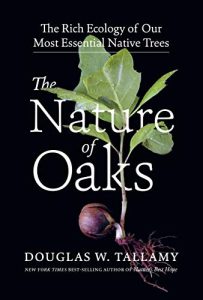 The Nature of Oaks: The Rich Ecology of our Essential Native Trees by Douglas W. Tallamy

Best-selling author and naturalist Doug Tallamy reveals the secrets and stories of essential native tree, the oak. Supporting more life forms and interactions than any other tree genus in North America, they make a story-worthy subject, and Tallamy traces these busy hubs throughout the seasons. (Buy it from Gardenshop!) 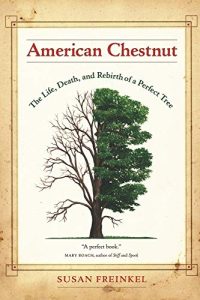 American Chestnut: The Life, Death, and Rebirth of a Perfect Tree by Susan Freinkel

In American Chestnut, author Freinkel looks at the response to the ecologically devastating fungus that brought this once-thriving tree to near extinction. What follows is a dramatic story of those stubborn enough to refuse to let this cultural icon go. Freinkel weaves history, science, and observation, resulting in an educational (and entrancing) journey with a cast of unconventional characters who have fought for the tree for a century. 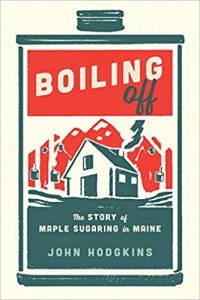 Boiling Off: Maple Sugaring in Maine by John Hodgkins

When three cousins tapped three thousand sugar maple trees in 1964, they put into motion a fifty-year story of maple sugaring in Maine. Interlaced with the history of sugaring technology beginning in 1781, Boiling Off follows sap gathering techniques from buckets and oxen-drawn drays to plastic tubing and vacuum pumps. This is the story of the art of making award-winning maple syrup and how it went from farmhouse staple to state commodity. (Buy it from Gardenshop!) 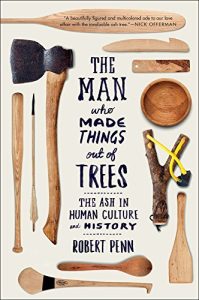 The Man Who Made Things Out of Trees: The Ash in Human Culture and History by Robert Penn

The ash tree’s unique properties have made it incredibly entwined with humans as creators of tools and art. Robert Penn takes us on a journey through a history that continues today of artisans and makers who have used the wood from the ash tree to make some of the most useful and beautiful objects. Traveling through Wales, Europe and Europe, Penn visits people’s workshops and learns  about their knowledge of ash wood and their craft, from making wheels and arrows, to baseball bats and fine furniture. Along the way he learns the true value of this tree and what we would lose if we do not address such threats as the emerald ash borer beetle to this amazing resource. 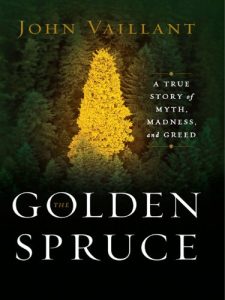 The Golden Spruce: A True Story of Myth, Madness, and Greed by John Valliant

In this amazing true tale of the clash between the logging industry, white settlers and indigenous people, Valliant uncovers the story about Kiidk’yaas, a unique golden 165 ft Sitka spruce that has been part of the Haida people’s legends for 100’s of years. Recently, this rare spruce was felled by former logger turned eco-terrorist Grant Hadwin, in a crime of passion. Villiant unfolds the circumstances around this act that reveal some truths about humans and their relationship to wilderness. The Golden Spruce won the 2005 Governor General’s Awards for non-fiction and was made into the movie Hadwin’s Judgement by filmmaker Sasha Snow in 2016. 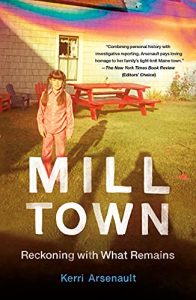 Mill Town: Reckoning With What Remains by Kerri Arsenault

Author Kerri Arsenault grew up in the small town of Mexico, Maine, near a paper mill in Rumford that employs most people in the area. In her debut book Mill Town, she documents the impact the mill has had on the land and the people who work there. While the mill may be the source of nearly everyone’s livelihood, the evidence begins to mount that it may also be responsible for the degradation of the local environment as well as the decline of people’s health. Winner of the 2021 Rachel Carson Environmental Book Award and the 2021 Maine Literary Award for Nonfiction, this book confronts us with the question, Whose lives are we willing to sacrifice for our own survival? 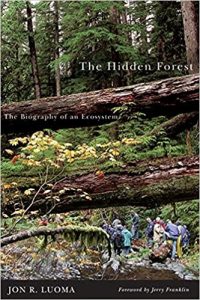 The Hidden Forest: The Biography of an Ecosystem by Jon R. Luoma

The H. J. Andrews Experimental Forest in Oregon’s Cascade Range is the backdrop to this book about 16,000 acres of old growth forest. For the first time, scientists of many disciplines came together to study the roles of everything in this ecosystem. Experienced science writer Jon Luoma shares with us their findings and how this will change the course of forest management of the future. Studying the canopy, insects, fungi and wildlife to the effects of clear-cutting floods and fires, this book is a short course on forest succession, biodiversity and politics of forestry all have their roles that play out on the forest field. A new forward by Jerry Franklin describes how important this type of long-term research site is, and what new discoveries have been made in forest ecosystem research. 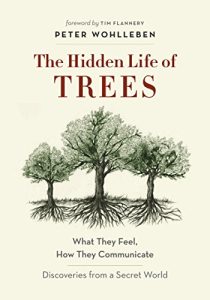 The Hidden Life of Trees by Peter Wohlleben

In this international bestseller, forester and author Peter Wohlleben convincingly makes the case that, yes, the forest is a social network. He draws on groundbreaking scientific discoveries to describe how trees are much like human families: living together, caring for children, communicating and warning of danger. Wohlleben shares his deep love of the woods and forests, explaining all the wonders he has observed in his woodland. As he shows us the science he shares with us how these insights have changed his practice as a forester and what it means to have a healthy forest that will sustain us not only economically, but physically and mentally as well. A must read, this book has been a best seller in our Gardenshop for years running. 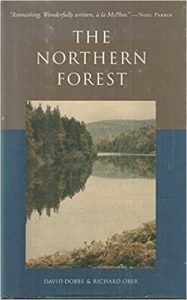 The Northern Forest by David Dobbs and Richard Ober

The Northern Forest that stretches across upper New York and into New England is a still largely unspoiled ecosystem that is recently under threat from many sides. Science and culture writer David Dobbs considers all the people who live here and their relationship to the land. From loggers to mill workers, to Christmas tree farmers to fishing guides, its people’s long-term relationship to the land and sense of place that can keep it strong even if it is often misunderstood by those who would want to save it. 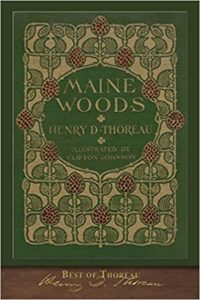 The Maine Woods was written by Thoreau after visiting Maine on three separate occasions. In classic fashion, Thoreau wakes our sense of adventure as he hikes mountains, paddles canoes, lives off the land and comes into contact with many interesting people. Intensely noticing everything around him, he writes about Abenaki Indians he met, loggers he spoke with and describes sitting around the campfire at night. Though more than 150 years ago, he foresaw the degradation of the wilderness and made an impassioned plea to value it. His sharp-eyed observations of plant and animal life as well as the humans he comes into contact will leave you with a love of this place and a desire to save it. 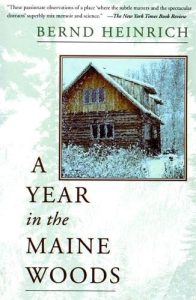 A Year in the Maine Woods by Bernd Heinrich

Heinrich, one of the top biologists of our day, is well known for his many books like Ravens in Winter and The Trees in My Forest. In this book, he lives in an off-grid cabin he built himself, with his pet Raven, Jack. His careful, patient and loving observations of nature touch our core as he asks the right questions to deepen our understanding of the natural world.  Known for focusing on the world “right outside the cabin door”, he delights in the drama of small things. This personal account of a quiet and peaceful life helps us rediscover what it means to be alive. 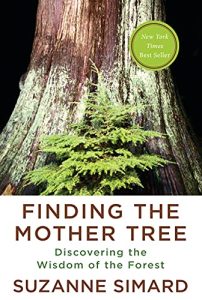 Finding the Mother Tree: Discovering the Wisdom of the Forest by Suzanne Simard

Finding the Mother Tree tells the story of Suzanne Simard, the ecologist who forever changed how people viewed the forest through her research on plant communication and intelligence, from her own perspective. This book also draws you in to the interconnected world of the forest, where trees no longer stand alone but rather compete and cooperate with each other in sophisticated ways that humanity has often ignored. Get inspired by her writing and learn to see the forest in a new way through her storytelling. (Buy it from Gardenshop!) 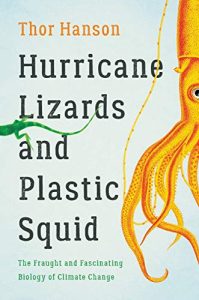 Conservation biologist and author of award-winning natural history books Buzz, Feathers, and The Triumph of Seeds Thor Hanson brings us his latest book Hurricane Lizards and Plastic Squid on the remarkable ways plants and animals are responding to climate change. From anole lizards to butterfly fish, Hanson’s light hearted storytelling brings to light how the natural world is responding to the human-caused changes accumulating around them. While extinctions and ecological devastations occur, life always finds a way. And if you haven’t read his other books, yes, read those too. 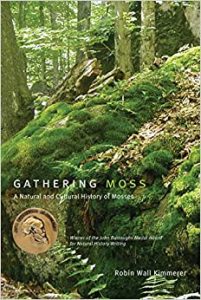 If you’ve heard of or read author Robin Wall Kimmerer’s Braiding Sweatgrass, Gathering Moss, her first book, is a must read. This collection of linked essays—part natural history, part personal reflections—brings the often unnoticed world of mosses into focus. Kimmerer draws upon her knowledge and experience as a mother, teacher, scientist, and Indigenous woman to reveal the connections mosses have to our lives. You’ll never see moss as just the carpet of the forest floor again, but rather as a miniature forest unto itself with a multitude of cultural and ecological relationships.