Trees of the Trolls: Meet the American Beech

This summer, five giant trolls have emerged from the woods at Coastal Maine Botanical Gardens. These trolls are nature’s protectors—the Guardians of the Seeds. Deep in the forest, they have saved and hidden seeds from ten of Maine’s most important trees. People can only find these saved seeds by visiting all five trolls and collecting their clues, but over the next few months you can get to know the trees of the trolls here in our blog. Take the time to get friendly with these trees over the summer, and you’ll have new friends in the woods for a lifetime. 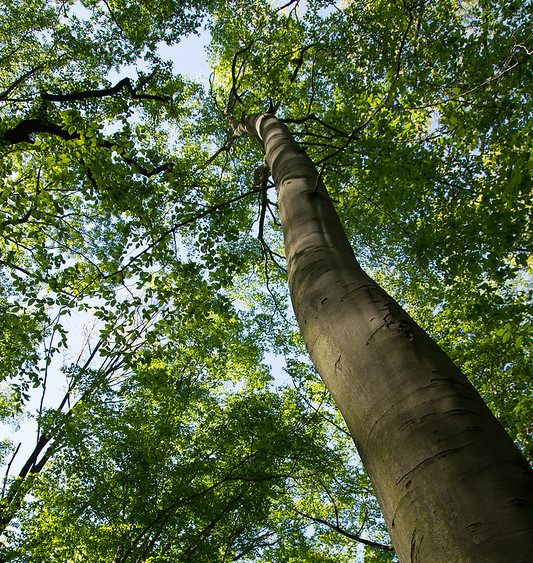 Fruit: irregularly triangular nuts that are shiny, brown, and edible; enclosed within a tough, spiny husk

As an important component of our hardwood stands, it is easy to see how the loss of this species would negatively impact the biodiversity of our region.

The American beech can be recognized by its smooth, gray bark. Native to much of eastern North America, it can be found across Maine, often as the dominant tree in areas where it grows. An adult tree can be 60 -100 feet tall. In the winter, they are one of only a few trees that hold many of their leaves, which turn light brown and curl. Sharp-pointed buds can be found at the end of their zig-zagging stems. During the growing season, beech leaves are dark green on top, pale on bottom, 3-4” long, pointed, and coarsely toothed on alternating stems.

The American beech is monoecious, meaning it has both male and female flowers on an individual tree. Flowers bloom in the spring and are wind-pollinated. Over the summer and into the fall, the fruit ripen, forming a prickly bur that contains an edible nut. Beechnuts turn from green to shiny brown as they ripen throughout the season.

As a nut-producing tree, beeches are also an important food source for many mammals and seed-eating birds. Beechnuts are high in protein and fat, making them a high-quality source of nutrition. Bear, deer, squirrels, chipmunks, foxes, blue jays, ducks, and more all utilize the fruit of American beech. If you see claw marks in the smooth, thin beech bark and piles of broken branches, then you’ve evidence of where bears have climbed to access the nuts.

Beechdrops, Epifagus virginiana, a native parasitic plant, requires the roots of American beech to survive. Keep an eye out for these interesting plants, found at the trees’ base, when walking in beech forests. An incredibly useful tree, this large hardwood can provide nesting opportunities for a variety of cavity dwellers, and its canopy provides nesting habitat for many charismatic bird species. Used by humans, beech serves as a source of fuel, flooring, and furniture. Nuts, leaves, and bark were traditionally used in various forms by Indigenous Peoples to treat several medical conditions.

These days, it is difficult to walk through forests dominated by American beech and not see the presence of beech bark disease, the result of an insect-fungal complex. This disease is currently the largest threat to this vital tree species, causing significant mortality in North American beech forests. Signs of infestation include cankers and blisters covering the tree’s normally smooth bark. Beech bark disease was introduced to North America around 1890 and has spread throughout eastern North America. Feeding damage of the invasive beech scale insect creates wounds on the tree’s bark, making them susceptible to the Neonectria fungi, canker-causing infection. With enough canker damage, the tree will eventually be girdled and die. BBD now has at least two insects and two fungi associated with it, both native and non-native. Scale insects can sometimes be recognized by waxy white specks on the tree bark. Methods for disease management have been mostly unsuccessful, but the importance of tracking and protecting resistant trees will likely be imperative to the species survival. Beech trees also face new pathogen—beech leaf disease. The cause and transmission of the disease is not fully understood yet, but it appears to be associated with a parasitic nematode that attacks trees of all ages. It was first reported in the United States in Ohio in 2012. Since then, it has spread throughout the Midwest and into the Northeast and southern New England. Just this year (2021), beech leaf disease was confirmed to have spread to Maine after it was identified by Dr. Robert Marra of the Connecticut Agricultural Experiment Station.

The leaves of infected beech trees display dark bands between their veins and are often curled, shriveled, or deformed. Mature trees can be weakened and ultimately killed by the disease in under ten years. The presence of multiple diseases affecting beech trees is especially troubling because those that have proven resilient to one disease may succumb to the other.

As an important component of our hardwood stands, it is easy to see how the loss of this species would negatively impact the biodiversity of our region. The American beech provides food and habitat to an extensive list of organisms in the forest that other tree species will not be able to sustain or replace on their own. This tree, common to the Maine woods, is often in found in dense or even pure stands, so its loss would create large swaths of open space. With the presence of beech bark disease and now beech leaf disease, fewer and fewer mature, nut-producing trees exist in the landscape, and it becomes ever more important to protect these key species. When walking through the woods, be on the lookout for healthy beeches and think about saving their seeds.