Trees of the Trolls: Meet the Black Cherry

This summer, five giant trolls have emerged from the woods at Coastal Maine Botanical Gardens. These trolls are nature’s protectors—the Guardians of the Seeds. Deep in the forest, they have saved and hidden seeds from ten of Maine’s most important trees. People can only find these saved seeds by visiting all five trolls and collecting their clues. However, over the next few months you can get to know the trees of the trolls here in our blog. Take the time to get friendly with these trees over the summer, and you’ll have new friends in the woods for a lifetime. 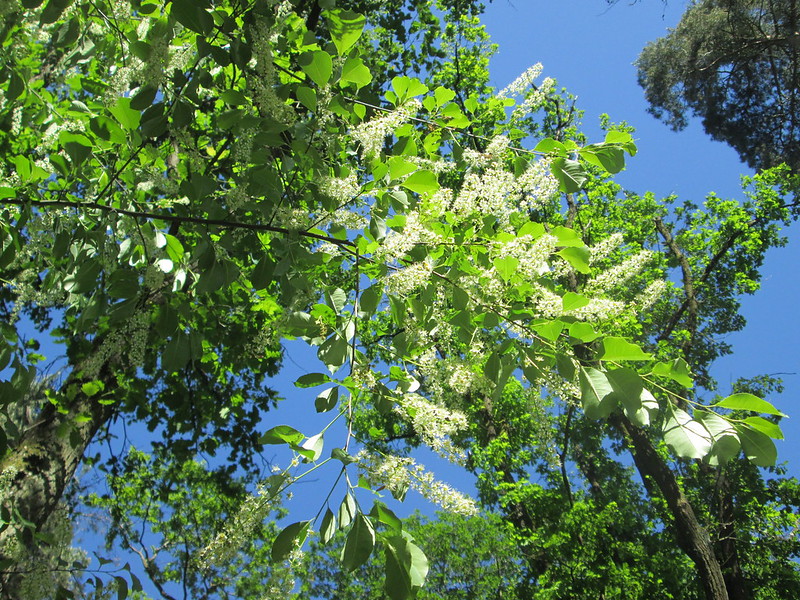 Buds: 3 or more scales on the winter bud, overlapping like shingles

Leaves: simple ovate to oblong leaves with finely toothed margin; alternate leaves with one leaf per node along the stem

Fruit: berry-like, fleshy pitted fruit that is black when ripe

Black cherry, wild cherry, and rum cherry are all names for one of Eastern North America’s most important trees: Prunus serotina. Its ecological value is perhaps exceeded only by the oak. This adaptable tree can be found throughout much of Maine, but grows especially well in rich, mesic soils. Its distinctly scented bark, large floral display, and abundant fruit are prominent characteristics. While almost all parts of this tree are toxic, the fruits are edible and used in jams and flavorings.

The bark and fruit has historically been used to treat coughs and other medical ailments. Timber from black cherry is also highly valued for its color, workability, and strength.

The dark lenticel-laden bark of black cherry flakes and scales as it ages. The alternating branches are thickly covered in long, shiny, green leaves with fine serrations along the margins. Black cherry leaves can be distinguished from other Prunus species by the rusty hairs along the backside of the midvein. Showy white flowers clustered along long droopy stalks appear in late spring and give way to dark fruits ripening throughout the summer. One tried and true method of identifying a black cherry is to snap a twig or scrape some bark off and smell it for the distinctly pungent odor.

Not only are black cherries an attractive tree in the landscape in their own right, they are also exceptionally valuable to wildlife. Black cherries are the host plant to over 450 species of butterflies and moths, including many charismatic species such as the Eastern tiger swallowtail, cecropia moth, the wild cherry sphinx moth, and the red-spotted purple.

Not only is black cherry vital for leaf-feeding insects, it also provides an important nectar and fruit source for many wildlife species. Heavily laden with clusters of white flowers, it is a major pollen and nectar source for many bee and fly species. Once pollinated, the flowers give way to dark fruits in late summer. These fruits are favored by wildlife from small songbirds to black bears and provide beneficial nutrition to their diets.

In the spring, cherries are often seen donning the silken homes of the eastern tent caterpillar. Many find these tents unsightly, but the insects within them rarely inflict lasting damage to the plant. The eastern tent caterpillar’s life cycle is timed quite well with the leafing out of black cherry. As the tree begins to leaf out, these social caterpillars emerge from their overwintered eggs, begin to feed and build their nests in the crotch of branches, then travel out of the nest to feed, retreating for protection during inclement weather. By the time the caterpillars are ready to leave the tree and pupate, many, if not all, of the leaves may be gone from the tree.

But don’t fret! There is still plenty of time in the season for cherries to recover and put out new leaves after these moths have moved on from their ravenous larval stage. Having only one generation per year means that when the eastern tent caterpillars are finished feeding on cherries, they will not need them again until next spring. As with most native caterpillars, these species have co-evolved with their host plants to be able to feed on them without killing the plant. In most cases, when a native insect causes irreparable damage to its host plant, the plant was already weak, too young, or not densely populated enough to support the insect. This is rarely the case with the resilient black cherry.

Eastern tent caterpillars are an important part of the food web. Over 60 bird species have been documented feeding on these caterpillars, many of which have declining populations such as the black and yellow-billed cuckoos. Not only do birds feed on them, but they also provide an important food source for many mammal and reptile species. As one of the first abundant food sources available in the spring, they are incredibly important for the nesting and breeding season of many wildlife species after long arduous winters. By directly supporting a whole slew of invertebrate organisms, black cherry indirectly supports even more wildlife species.

There is a common misconception that this tree is invasive because animals are quite adept at spreading the seed after gorging on its fruits. As a native tree, by definition, it cannot be invasive. Prolific? Yes in some areas. Easy to prune and pull if needed? Absolutely. Try leaving the volunteer trees on your property, shaping them to fit in the landscape or transplanting them to more ideal locations when they show up where you do not want them. Then, sit back and enjoy watching the wildlife benefitting from your low maintenance (and free!) tree.