Form and Texture in Graphite 2 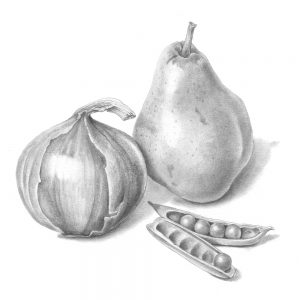 This class is a continuation of Form & Texture with Graphite, Part 1. Develop an understanding of graphite while applying it to more complex natural subjects such as a pineapples, pinecones, artichokes, or the interior of a pepper. Skills include rendering different pigments in greyscale and exploring the tonal quality and textural differences between surfaces. Learn to translate multi-colored subjects into tonal values while maintaining form and perspective.

Pre-requisite: Suggested as a continuation of Form and Texture with Graphite Part 1.

Week 1: Artichoke: Learn the basics of how an artichoke is structured in nature and to accurately depict the texture and form of the surface. Other structures similar to this are the pinecone and pineapple.
Week 2: Walnut: The outside and inside of the walnut present many challenges in portraying texture and concave/convex shapes. Apply skills learned to depicting structures like tree bark.
Week 3: Twisted long pepper: Create shimmer and sheen on a smooth surface and document how the skin changes as the pepper ages and begins to decay.
Week 4: Turk’s cap plants or similar subject matter: Create multiple pigmentations and textures in a single subject matter.

Mindy Lighthipe is passionate about getting out into the natural world and discovering the beauty in every rock, stream, and forest. Using a variety of techniques, Mindy works in watercolor, gouache, colored pencil, and pastel. Mindy received her Certificate in Botanical Arts from The New York Botanical Garden, where she later taught. Currently she teaches scientific illustration at the University of Florida.